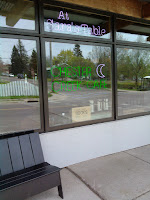 Took a road trip for Mother's Day, and visited one of our new favorite places in Duluth.  We've been here before, having been directed here through Diners, Drive Ins, and Dives.  This time tho, we ended up visiting on a weekend.

ASTCCC is a local diner, run by locals.  Weekends, all they serve is brunch.  And by 'brunch', I mean 'breakfast items with a couple of sandwich options'.  Having breakfast at 1 in the afternoon is a little...odd, but I dealt with it :) 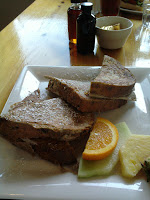 I went with "Diane's Famous House-made Cranberry Wild Rice Bread French Toast", with a side of two eggs (priced by the egg!) and a side of bacon.  Not only is the name of the dish a mouthful, the meal was too.  The bread was huge!  Think of Texas Toast - now, about 25% larger than that.  The toast was served with a side of locally harvested Maple Syrup and a house-made Oatmeal Stout Beer syrup.  I could taste the maple, definitely.  I wasn't so sure about the Stout.  It was dark, and not like your regular syrup.  I suspect it might be an acquired taste.

The french toast was very filling.  You could see the cranberries and the wild rice.  The rice added an interesting texture, but I was hard-pressed to taste the tartness of the cranberries.  Maybe because it was near the end of the day, and the bread wasn't as fresh as it might have been at 7am.  Not that I'm complaining.  As I said, it was very filling, it was nice and hot, melting the butter almost immediately.  The bacon was nice and crispy, the way I like it (but not burnt-crispy), and the eggs were over medium(ish), as I asked, although I think they edged towards over easy. 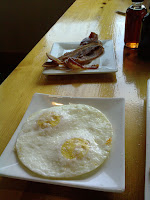 (I've yet to find the right 'over medium' egg.  Over easy is way too runny, over hard is usually 'fried egg sandwich' style, and over medium is too 'easy' for me.  I wonder if I can order an egg 'medium-hard'?)

Overall, a good place to eat.  The interior style was rather 'eclectic', actually making you feel like you were in somone's kitchen or dining room, and not in an actual restaurant.  It's a little difficult to find the first time, if you're new to Duluth, but once you find it, mark it on your map.  You will be back (and so will we!).

Posted by dylking at 8:39 PM No comments: 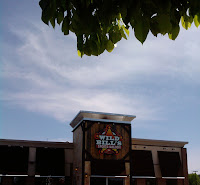 Wild Bill's is a local burger chain.  If I had to give a quick summary, it'd be "Hooters with Burgers".

We went there at lunch on a Saturday, and although it was crowded, there wasn't a wait - always a good thing! For an appetizer, we went with the "Bleu Poker Chips".  Potato Rounds (not fries) sprinkled with Blue Cheese crumbles and chopped up bacon.  When they were delivered, they were still hot, crispy on the outside, and potato-y on the inside.  The bleu cheese was a little skimpy, although there was plenty of bacon.  The dipping sauce was a Southwestern Ranch, and wasn't spicy.  I couldn't tell the difference between it and regular ranch, to be honest, except for the color.

I orderded the Wild Bills Works burger - American and Swiss cheese, bacon, sauteed onions, and sauteed mushrooms.  I also went ahead and got the lettuce, tomato, and onion (optional, and they ask if you want it rather than making you ask to add it).  I got the default fries as well. 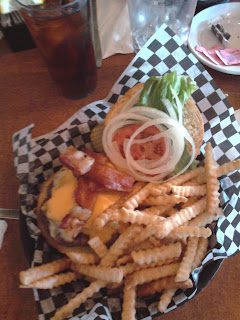 When the burger came, it was hot as well.  It was cooked medium well (closer to well).  I took off a few of the onions (didn't want to overload the burger with 'all onions all the time').  It was a decent size burger (8 ounces), but I didn't need to cut it.  The burger was well seasoned - I could taste it, even under the cheese, bacon, onions and mushrooms.  The lettuce was crisp, not wilted, the tomato was firm and ripe, and even the onions didn't give off too much of an onion-y taste.

The fries were cooked well, too. Crispy on the outside, fluffy on the inside, just like the potato rounds.  However, I did make a mistake there.  Potatos for an appetizer, and potatos as a side dish...oof.  I was able to fnish my meal though.  No desert for me!

The place was crowded, and I guess one of the draws was that they were having a bingo game going on, starting about a half hour after we arrived.  The 'annoyance' factor went up a little bit, as we were first bugged if we wanted to buy a bingo packet, then a little more as we had to listen to a bingo caller during our meal.  If you're looking to have a nice relaxing time, noshing on a burger, don't come Saturday afternoon.

I will come back here again.  The burger was cooked and seasoned properly and service was quick and attentive (never had to wait for a check or a refill).  One thing to remember - don't get two types of potatos!

Posted by dylking at 4:00 PM No comments: 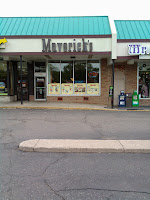 Maverick's is a local restaurant focusing on Roast Beef.  They're a no-frills, all expenses spared kind of place in a small strip mall, and if you didn't know it was there, you wouldn't see it.

Once upon a time, this place got rave reviews for it's food - there's all kinds of clippings from magazines and newspapers attesting to this.  However, I think things have changed.

First, as soon as you walk in, you're bombarded with the question of whether you want anything fried with your meal.  If you haven't read the menu, how would you know?

I went with the BBQ Beef sandwich (a large) and Onion Rings.  Since they had to fry the rings, they put a marker on my tray so they could bring them out to me when done (the marker was an upside down plastic cup with some tape on it).  We got a table, and as I was heading to the beverage machine, they brought me my rings.  At the soda machine.  What am I supposed to do with them at the soda machine?  I ended up taking them back to my table, then going back to get my soda. 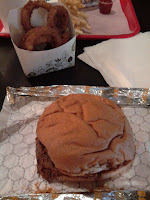 The sandwich was messy.  They put too much BBQ on the bun, in my opinion.  In addition, they used a soft bun, which ended up being just squishy, and couldn't hold up to the meat.  The BBQ didn't have much noticeable flavor to it, at least nothing I would rave about and say 'better than Arby's'.  If you've had an Arby-Q, you've had this.  Which is sad for a local, non-chain, restaurant that's supposed to be focsued on Roast Beef.  The onion rings, for being 'fresh', were overcooked, frying out all the onion-ness.  I like a crispy onion ring (or fry, for that matter), but I want to taste the flavor of the thing, as well, not just 'crunchy'.

While we were eating, someone came over (the manager? the owner?  they never identified themselves) and learned that one of us had never been there before, and so he had 'samples' brought to our table of the Roast Beef sandwich and the Beef Brisket sandwich.  The samples were simply a sandwich cut into quarters.  When it was delivered, the server said "If you like, it tell all your friends.  If you don't, keep it to yourself".  I assume that was in jest, but rather poor.  I'd think they'd want to know if I didn't like it, why, and how they could make it better.

The Roast Beef had no flavor, and again the soft bun turned to mush.  The Brisket did have some flavor, but was way overpowered by the Rye bun it was served on.

Maybe they were having an off day.  Maybe I just wasn't in the mood for hijinks (I was fighting a headache).  Maybe not.  I don't know that I will be headed back there any time soon, though.  There are other, better places in town to get sandwiches with actual flavor.

dylking
I've been hanging on the internet before there was a world wide web, but I'm still learning new things every day!